The Lake Wylie Dam through Landsford Canal State Park section of the Catawba River has a number of boat launches located along this corridor. Boaters should note that only these access points identified in this trail map are public. Other access points that you may see from the river are privately owned.

"The Catawba River begins in the foothills of North Carolina and flows for more than 200 miles through the Piedmont of North Carolina. Beginning in 1904, a series of hydroelectric dams were constructed to harness the power of the river to provide electricity for the region. The 30-mile stretch of the Catawba River between Wylie Hydro and the upper end of Fishing Creek Lake is now the longest portion of the Catawba River that remains undammed. This does not mean, however, that the river is free-flowing. Flows in the river are directly related to releases from the Wylie Hydroelectric Dam. The amount of flow released will greatly affect a boating experience; you are strongly encouraged to consult Duke Energy’s website www.duke-energy.com to see what flow conditions are anticipated during your trip.

Despite its proximity to Charlotte, Rock Hill, and other developed areas, much of the land bordering this portion of the Catawba River remains wooded and natural. While access to the river has improved and will continue to do so, there are still many sections of the river that are remote and difficult to access. This characteristic makes the SC Catawba River a haven for wildlife of all sorts. In addition to being rich in wildlife, the SC Catawba River is also rich in history. The river has provided for the people of the Catawba River Valley for more than 12,000 years. Beginning with the ancestors of the modern-day Catawba Indian Nation, through the first European explorers and early settlers, to those who continue to flock to the region today because of the quality of life, all have left their mark on the river." - Duke Energy - SC Catawba River Canoe Trail Map

Stretched along the Catawba River on the South Carolina fall line, Landsford Canal State Park is home to the well-preserved remains of the canal system that made the river commercially navigable from 1820 to 1835. The Catawba River is home to the largest known stand of the rocky shoals spider lily, a flower species found predominantly in the Southeast. Peak bloom season for the rocky shoals spider lily is during May and June. View the map of Landsford Canal State Park.

Water levels on this section of the Catawba are dependent on the water releases from the Lake Wylie Dam. There are scheduled recreational releases from the dam on weekends (Fri – Sun) starting in late April through the end of September. Fort Mill Dam (Lake Wylie) Recreational Release Schedule: VIEW

They offer a discount on local Adventures of 10% off any rentals if you mention Carolina Thread Trail. 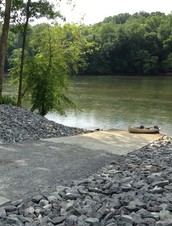 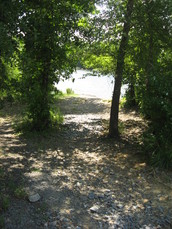 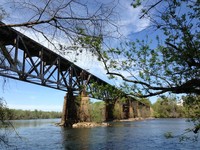 When out on trail in cooler weather, wear layers which are easy to add/remove so that you can maintain a comfortable temperature.